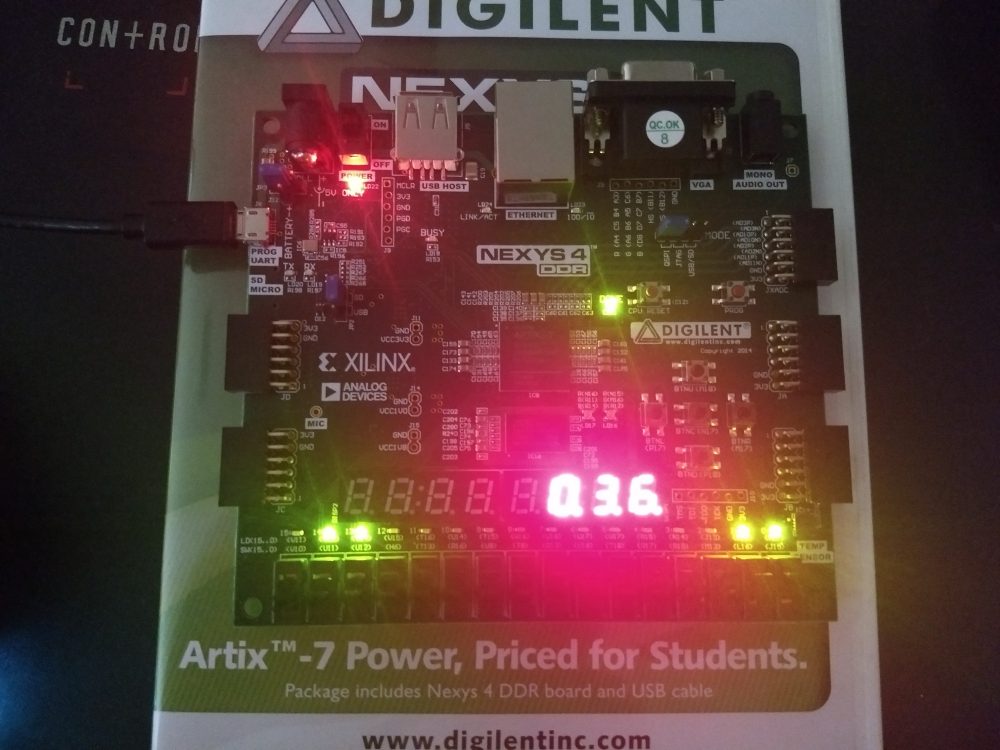 The scope of this project is to use a few buttons to select between math functions (addition, subtraction, multiplication, and nondecimal division), and display outputs (binary, decimal, hexadecimal) to an 8 wide 7 segment display. The board used was a Nexys 4 DDR, purchased from digilent. The code was written in Vim, with a syntax for verilog imported in. All code was compiled and simulated with Vivado 2018. The bit file generated by Vivado after verifying the simulation was downloaded to the board using digilent’s adept tool. This project was inspired by this tutorial

Breaking down the project:

Based on the description, we know we need two (2) buttons, a controller for eight (8) 7-Segment displays, and a mux for different math functions. I started the project with the display controller.

As a quick lookup for my 7-Segment display values, I created a Look Up Table (LUT) to be used later on in the file for assigning the data with the correct display output.

With the LUT established, we must create some sort of refresh counter to determine how quickly the controller will cycle through the values so that to the user it appears that all 7-Seg displays are operating at the same time. To find the time needed for a counter, we can use an equation

The clock on my board is 100MHz, thus, with a 20bit counter, we can get around a 10ms refresh rate (incidentally, this is also the refresh rate of my debouncer handlers taken from the url link attached to the image).

I added a few other data storage elements believing that the calculation of discerning the decimal at a certain place was causing my numbers to bleed into each other on the 7-segment displays. This was not the case, it was my selection of refresh rate creating too quick of change, so that the number from one 7-segment would be displayed for a moment on the other 7-segment. This problem was solved by increasing the spaces on the case statement you will see below:

With the display module finished, we need to create a math select module and a debouncer module for our two buttons.The math module is quite simplistic, and using only combinatorial logic, has no need for clocks or reset ports.

The top file is shown in a screen shot below. I used a quick counter in the top file to ensure that the display counter never went above 2’b10, which I never specified in my display module. The debouncer module was actually taken from this link, which has some great information regarding debouncers and how they function.

The simple project works fine, and can cycle through displaying hex, decimal, and binary for an 8 bit data number generated from two 4 bit data storage elements.

Note, saved as *.txt files due to *.sv and *.v files not being permitted on the server I’m using.